How to Grow Your Food Truck Business into An Empire

Eric Silverstein, executive chef and founder of The Peached Tortilla, dishes on the early days of his food truck business and how he grew from one truck to an Austin food empire.

Many food truck owners dream about making the leap from service window to full service restaurant. But when Eric Silverstein, founder of The Peached Tortilla, looks back at his journey from food truck to food empire, he remembers not a single leap but a series of small steps.

Eric started in the food industry at 16, working at Einstein Bros. Bagels and other chain restaurants before heading off to college to become a lawyer. But the restaurant world still pulled at him. “I tried to raise money for a restaurant and it just wasn’t going to happen,” Eric says.

It was unfortunate timing: 2009 and the economy was just starting to recover from the recession. “People were tight gripped with their money and weren’t going to invest in somebody who had no experience.”

Eric wasn’t ready to give up. His attention turned to LA, a city where the food truck market was already booming. After some research, he decided to leave his career in law and start a food truck business, with plans to expand down the road.

Wondering how to grow your own restaurant business? Eric shares the highs and lows of how he turned a food truck business into a restaurant empire. 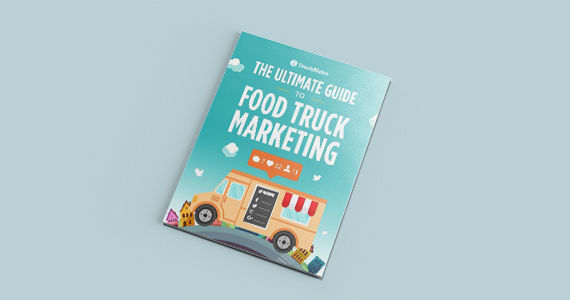 Accept that You Will Encounter Unexpected Problems – and That’s Okay

“Everything was a challenge,” Eric says, remembering his first year of running the food truck. Contrary to his expectations, after three or four months he realized it was all going to be an uphill battle.

“The actual physical truck was a challenge. It didn’t run every day. [There were issues with] everything from tires to engine to fuel tanks. And the heat. There’s no AC in these trucks, and it’s 105 degrees outside. There’s nothing easy on a food truck.”

Expand Your Restaurant in Small Steps – not Leaps and Bounds

Once the food truck was well underway, Eric focused on taking small steps forward to expand the business. When I first started the business, I was leasing a food truck. So the first step was to buy a truck, build some equity, and have an asset.”

Eric custom built one truck, then another. Next came the catering business and, finally, the restaurant lease.

The business grew from there, adding a couple new elements every year that expanded the reach of the business. Eric’s catering space needed a commissary kitchen, so he moved into a new facility. The new facility led to a an additional event space called the Peached Social House.

Before long, Eric had signed a deal for a restaurant location at the Austin airport.

“And then we decided we needed more space for catering, so we built a 2,500-square-foot warehouse and extended the space at Social House another 550 square feet to include a patio,” says Eric. “So it happened in layers, not all at once.”

While The Peached Tortilla grew through a lot of little steps, the move from food trucks to brick and mortar was more of a leap. Eric knew the POS system he was using on his trucks wasn’t going to be sufficient for a full service restaurant.

Enter TouchBistro POS: Eric found the system had the features he was looking for but also required less hardware, fewer upfront costs, and lower licensing fees than a traditional POS. “I’ve always felt like some things are done in this industry just because they’ve always been done a certain way – but maybe that’s not the best way to do them.”

TouchBistro became part of The Peached Tortilla journey, helping Eric open the first brick and mortar location. Now he uses the system not only to process transactions but also for daily sales reporting, year-over-year reporting, and tableside ordering – a feature that increases his speed of service and rate of table turnover.

Envision a Clear Goal from the Beginning…

What is it you want to accomplish with your empire? A restaurant? A catering business? A product line? You should be thinking about these things when you’re just starting your business, so you can work towards them.

“My advice for food truck owners would be have a long game. Know what you’re in it for,” says Eric. “If you don’t know what your end game is, you’re going to fail. There’s no reason to run a food truck forever – there’s just not enough money in it.”

Eric suggests basing your expansion plans on something other than your food truck sales numbers. “Chances are they’re going to be okay but not great. Don’t let that deter you from growing,” he says.

“There are a lot of sacrifices that need to be made to be successful in this business. So if you’re willing to make those sacrifices, you’re passionate about your food, and you think you can be successful, then go for it. But make sure you have a plan.”

… but Be Flexible with Your Business Plan

Does anything ever go according to plan? (No.) Restaurant owners know this reality all too well. While Eric stresses the importance of a plan, he’s also learned to expect the unexpected.

Throughout the highs and the lows, the carefully laid plans and the plans made by the seat of your pants, Eric’s advice for growing a restaurant empire is to focus on the future. That next step. Then that next next step.

The same advice holds true for the restaurant technology that will help you get there. “The way of looking at POS systems in restaurants is changing,” Eric says. “I think a lot of younger restaurant owners value an iPad-based POS system, especially when you can take an iPad mini tableside, take orders, and speed up the process. Why not be at the forefront of this kind of stuff?”

33 THINGS A POS CAN DO FOR YOUR VENUE

How The Peached Tortilla Uses TouchBistro for Their Business:

100 Most Unique Restaurant Concepts Around the World

How Epicurean Garage Grew its Business 37% During the Pandemic